Bird Face is a standout among novels written for or about the junior-high crowd; this book doesn't deal with vampires, the occult, or any of the other usual subjects. Instead, the book delves into the soul of Wendy, a shy but talented eighth-grader who's trying to find her place in her family, her community and the cliques in her school. As she discovers more about who she is and how to be a friend to those around her, she sees others' vulnerabilities. 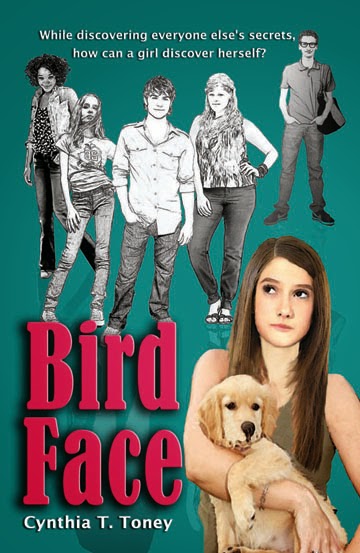 Author Cynthia T. Toney nails the voice of the fourteen-year-old protagonist. Wendy’s faith is right up front in this novel, beginning in the very first chapter when she’s seen struggling against the impulse to swear—an impulse she’d confessed in the past and was trying hard to resist. Not a goody-two-shoes but definitely someone who’s trying to do what’s right, Wendy fights feelings of jealousy when she’s left out of the “in” crowd as well as when others have the nice things she wishes she could own. Wendy is also the victim of a bully, and her attempts to shake his verbal attacks and vandalism occupy much of her mental energies.

There’s a bit of a mystery in this story: anonymous sticky-note messages for Wendy, left all around school. These mysterious notes encourage her when she’s struggling the most, reminding the reader that people who really care are the ones who want the best for others. As Wendy seeks clues to the mystery note-writer, she encounters friends and classmates in crises of their own.

Bird Face is a winning combination: a good story, a realistic main character, and an exploration of the meaning of friendship. Recommended for middle-schoolers and teens--but this book carries messages for the adult reader as well.

Bird Face can be purchased at Amazon, Barnes & Noble, Books-a-Million, or at your local bookstore.
Posted by Barb Szyszkiewicz at 7:23 AM